The mission of the Nonprofit Leadership Alliance is to strengthen the social sector with a talented and prepared workforce.

The Certified Nonprofit Professional (CNP) credential is the only national credential that combines critical skills and knowledge, practical experience and a national perspective. It is available through the Alliance’s network of 40 universities and colleges. These educational institutions, in conjunction with the Alliance’s national nonprofit partners and CNPs, represent the largest network in the country working to strengthen the social sector with a talented and prepared workforce.

The Nonprofit Leadership Alliance believes in full transparency in all of its operations. As an organization preparing the next generation of nonprofit leaders, we strive to demonstrate the best practices of the sector. Here you can find our governing documents, ethical standards, and financial information.

*Please note that some of these documents were drafted and filed under our previous name, American Humanics.

Ethical Standards
The Nonprofit Leadership Alliance has signed on to the Principles for Good Governance and Ethical Practice convened by Independent Sector’s Panel on the Nonprofit Sector. By so doing, we have pledged to uphold a high level of ethical practices and governance. To learn more about these 33 ethical standards subscribed to by our board and national staff, please visit http://www.nonprofitpanel.org.

Financials and Reporting
Below you will find our filed IRS Form 990 and audited financial statements. Independent auditors conduct an audit of Nonprofit Leadership Alliance’s finances annually. Our financial reports can also be found on Guidestar.

Accountability
In our effort to maintain accountability, we also are reviewed by independent organizations that objectively evaluate our practices.

The Nonprofit Leadership Alliance was founded in 1948 as American Humanics by H. Roe Bartle – a visionary and social entrepreneur who believed that the most important determinant of nonprofit success is the quality of its workforce. Bartle saw a significant deficit in nonprofit leadership – at a time when demand for youth programming was at an all-time high. His response was to build a hands-on training ground that would be housed in an academic environment. Bartle’s vision lives today in the Alliance: the largest network in the world working to build a pipeline of talented and prepared professionals.

1994-2002
Period of Expansion
• W.K. Kellogg and other foundations invest in American Humanics to expand the number of colleges and universities offering the credential 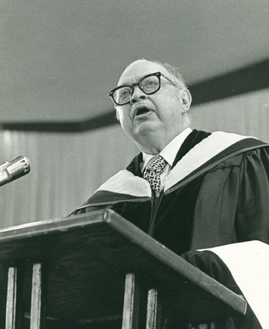 H. Roe Bartle was involved in Scouting for the vast majority of his life. He began his professional Scouting career at age 21 as Scout Executive for the newly formed Cheyenne Council. The council covered the entire State of Wyoming, and was based out of Casper, Wyoming. In 1928, Bartle became the Scout Executive for the Kansas City Area Council, and served in that role for 27 years until his retirement in 1955. In later years he donated his salary back to the council each year to be used to further the cause of Scouting. For nearly 30 years, the Chief, as he was often called, led the Kansas City Area Council, now the Heart of America Council of the Boy Scouts of America. Having also served two terms as Mayor of Kansas City, it is no coincidence that the Kansas City Chiefs have their name.

We use cookies to ensure that we give you the best experience on our website. If you continue to use this site we will assume that you are happy with it.OKPrivacy Policy